If I were making a list of things that make me happy, childrens and YA books would rank pretty high. And so, of course, would cake. Who doesn’t like cake?  And thanks to the magic of people who make astonishingly detailed cakes and post pictures of them on Flickr, I’m able to bring these two things together today.  I hope you’re not hungry!

If we’re talking about children’s book authors who have inspired bakers to greatness, the conversation begins with one man: Dr. Seuss.  His books have been the jumping off point for some awe-inducing cakes, like this terrifyingly life-like Grinch.  Many of the man’s greatest hits have been celebrated in cake form, from The Lorax to a very tasty plate of Green Eggs and Ham.  But when it comes to Seuss cakes, one book dominates them all.  With striped hats, angry fish, and piles of chaotic red-and-white, there is no shortage of gorgeous cakes based on The Cat in the Hat.

For fans of everyone’s favorite boy wizard, I’m pretty sure that Hogwarts and everything in it has now been made into at least one cake. Hop on the train at Platform 9 3/4 – don’t forget Hedwig and your spell books!  Grab a treat on the train, and wait for your first view of the castle.  Once you make it to Hogwarts, the sorting hat will put you into a house.  Grab a broom and head out to the Quidditch pitch – maybe you’ll be the first the catch the golden snitch.  While you’re at Hogwarts, watch out for basilisks and dementors, books that bite, and giant killer chess sets.  And don’t forget to read the books!  For you, readers, I tried.  But sadly, there are no Voldemort cakes on Flickr.  This is a grievous omission in the world of Potter cakes, and somebody out there needs to get baking!

I have to say, the cake creativity for YA phenomenons pales next to the kidlit cakes.  But I can hardly ignore the Twilight books (looks like New Moon got passed over by the cake bakers).

Comic books and manga are well-represented in the world of amazing cakes.  If you’re looking for traditional comic book heroes, you’ll find them all: Superman, Spiderman, Wonder Woman, the Hulk, Batman, and my personal favorite, this hysterical Wolverine from the X-Men.  For you manga fans, cakes range from Dragon Ball Z and Shin Chan to Fruits Basket and Death Note.  Yes, that is a cake of L from Death Note, and yes, it will make you giggle.  Look at those angry, delicious eyes! 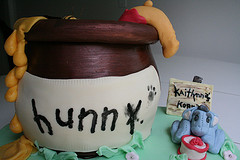 It’s easy to find beautiful cakes from deep in the Hundred Acre Woods, but almost all of them are of the Disney-fied Pooh.  Kudos to Guernseybabycakes, the maker of this sweet classic Pooh cake.  Of course, before we move on from AA Milne, it wouldn’t be right to leave out Eeyore.

Cakes from the once upon a time world of folk and fairy tales also tend to be Disney-fied – although the books make it into some of them.

Mr. Milne isn’t the only classic children’s author to have a cult cake following.  Beatrix Potter cakes are going strong, with Peter Rabbit leading the way.  But if you look closely, you can find a few daring bakers who have gone beyond Peter’s popularity.

Other popular picture books have their own cakes, too.  Curious George is an especially big choice with the picture book cake-making crowd.  Eric Hill’s Spot and the Rainbow Fish each make an appearance.  And my personal favorite picture book cake is from Maurice Sendak’s Where the Wild Things Are.  (Another note for bakers –  where are the In the Night Kitchen Cakes? Come on – “Milk in the batter!  Milk in the batter!  We bake cakes and nothing’s the matter!”  It’s calling out for a cake representation.  I might do this one myself!)

Among the chapter books, the winner out of the gate is Alice in Wonderland,  with the Narnia series coming up close behind.  Beloved characters like Paddington Bear and Pippi Longstockings have some pretty impressive cakes, too.  This Roald Dahl cake, featuring many of his characters climbing out of a tall stack of books, is an absolute beauty.

Hope that’s enough cakes for you.  As for me, I’m going to go find something sweet to eat.  If you have a favorite book-related cake, I’d love to see a picture!  Especially if anyone finds some YA book cakes.  They must be out there somewhere.