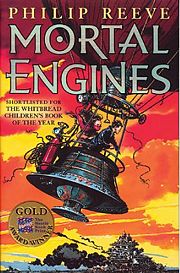 Last week I walked by the far end of an enormous parking lot.  A heavy winter’s worth of snow was pushed and piled up on the asphalt, criss-crossed with dirty tire tracks and trash.  It was a desolate corner.  I imagine that the world Philip Reeve created for his Hungry Cities Chronicles looks a lot like that parking lot – only in Reeve’s world, each of those tire tracks is miles wide and as deep as a ditch.  After the world was devastated by the Sixty-Minute War, cities desperate for natural resources raised themselves up on massive caterpillar tracks and wheels and began to hunt down smaller cities in order to steal their food, fuel, and resources.  The first of those Traction cities was London.

Hundreds of years later, Municipal Darwinism has left the earth bleak and bare, and London is running out of prey.  The Guild of Engineers, not a particularly friendly bunch, have hatched a secret plan for London’s future.  When young Tom Natsworthy, apprentice Historian, accidentally stumbles on some of the city’s secrets, he is plunged into an epic adventure that will follow him through five continents, four books, and the rest of his life.

Philip Reeve’s world-building is nothing short of astonishing.  The history

of Municipal Darwinism unfolds slowly, and Reeve has clearly put a lot of thought into the development of the world that his characters inhabit.  The cities rise in tiers, with the poorest inhabitants living in the lowest tiers – where cities that have been eaten are processed , and where the mechanisms that run the Traction Cities make it hot, noisy, and almost uninhabitable.  Jokes and bits of history can be found in many of the names, from London’s elevator system (The Tube) to the improbably named airships that Tom encounters (The Visible Panty Line.)

We meet only one uncomplicated character in Reeve’s world – Tom, who is good and brave to the point of becoming uninteresting.  But Tom does manage to make a few mistakes, and plenty of complexity is provided by his traveling companion, Hester.  While Tom is almost too genially likeable, it is sometimes impossible to relate to Hester.  She is prickly, jealous, and hell-bent on revenge.  As the stories go on, we learn that she has absolutely

no regret for killing people – in fact, she almost enjoys it.  In the final books she is traveling with a Stalker – a half-zombie half-machine created specifically to kill – and it is not difficult to find more humanity in the Stalker.

And yet Tom loves her – and she loves him back fiercely, and sometimes dangerously.  Being in love in the world of the Hungry Cities is not likely to end well.  Betrayal, death, or abandonment are the usual outcomes.  Sometimes all three!  And attachment is not only dangerous for the characters – reader beware!  You will get attached to these characters, and they will die.  A lot.  Mr. Reeve has no misgivings about killing off favorite characters left and right.  They live in a dark world where people (and cities) show no pity.

This series is a true epic, where actions and decisions have real consequences, even if the effects are not ever seen by the character.  Even the tiniest choice can ripple out through the world of the books, and it is these massively flawed characters who are making the decisions.  The core cast of characters will come across each other over and over, and the threads finally come together in the final book, A Darkling Plain.  Reeve keeps the action constant right up until the end, and the conclusion is immensely satisfying.  I cannot recommend these books highly enough.

The Hungry Cities Chronicles on the web.

Philip Reeve on the web.