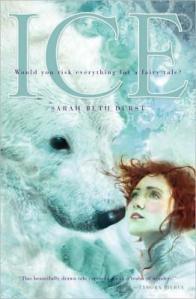 A conversation about metaphysics between a teenage scientist and her husband, who is a giant talking polar bear.  Right now you’re either pulling a face at me or you’re hooked, right?

I was pretty hooked.  This is not a story that pulls punches with the absurdity of it’s premise.  Durst’s novel is a re-telling of the fairy tale East of the Sun and West of the Moon.  Now, the original is a strange and compelling story that leaves a lot of strange gaps in the plot – gaps that are just begging to be filled in and explored by an enterprising YA author.  So it’s no surprise that this story has already been tackled multiple times, most memorably in Edith Pattou’s exquisite East. The strangeness of this particular story is brought into sharp relief by Durst’s choice of a modern setting, and it can be jarring – both for the reader and the characters.  But if you’re willing to suspend a little disbelief, you will find a wonderful love story and an epic adventure in Ice.

Durst’s take brings in some unexpected elements.  Myth and science are married in many ways in this novel – most literally in the actual marriage between Cammie, an 18-year-old arctic scientist, and Bear, a giant mystical polar bear.  Durst also throws an interesting touch of religion into her explanation of Bear’s strange powers.  It’s a wonderful mix, especially when Cassie and Bear find an elegant way to bring their talents together, using Cassie’s scientific expertise to help Bear’s magical purpose along.

In the original story, the heroine saves the polar bear through her exceptional laundry skills.  Cassie brings a little bit more to the table.  She is a dedicated scientist even at 18, and her passion for the arctic is palpable even at times when the brutal wilderness is moments away from killing her.  She is a risk-taker who will throw herself whole-heartedly at a problem, usually without much of a plan.  But her determination and ingenuity see her though, making her a pleasure to read.

I did sometimes find the plot of the book fragmented.  Cassie’s goals change several times over the course of the novel, and some of those goals feels much more urgent and are better at driving the story.  I felt this most in the parts of the story that dealt with Cassie’s mother, who Cassie is so dedicated to saving in the book’s beginning, but who never becomes an important part of the story after she has been saved.  I would have liked to see more growth in that relationship.  The second half of the novel gives Cassie one clear goal – to find Bear and bring him home.  This brings the story into sharper focus, and also brings Cassie’s best qualities – her determination and fortitude – to the forefront.  Cassie is a kick-ass girl, and she gets to show her grit when this thoughtful story turns into an epic survival adventure in the frozen north.

Sarah Beth Durst on the web.

Review copy provided by the publisher at the author’s request.