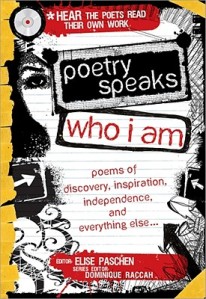 It’s National Poetry Month, and could there be a better way to celebrate than with a first-rate collection of poems for middle grade readers?  Even better, these poems focus on a topic that weighs heavy on the minds of young readers: personal identity.  The poems come at this broad theme from many angles, sometimes taking it on very directly as in Gwendolyn Brooks’ poem “I Am Black,” sometimes in a more roundabout way.

I was especially impressed by the diversity of poets and poems that were chosen for inclusion.  The collection presents a well-balanced mix of the old and the new, the serious and the funny, the well-known and the unfamiliar.  But more than that, the poems come from a truly diverse group of poets.  The editor has clearly put thought into the gender, race, class, and religious backgrounds of the contributors, and because of this careful selection every reader is likely to find a poem that will speak to who he or she is.   Despite being well outside the target age of this anthology, the dog-eared pages of my copy show that I made my own connections to many selections.

The book opens with “Eternity” by Jason Shinder, which is a lovely introduction to the bond that can form between a reader and a writer of poetry, despite differences of time and culture.  By highlighting a strong personal connection to poetry from the very first selection, the editor encourages young readers to make their own connections to the featured poems.  Several more poems are specifically about the act of reading or writing poetry, and the book ends with a section of blank lined pages that encourage the reader to become a writer of poetry.  I liked the sense of progression that these selections seem to encourage, starting as a reader of poetry, moving on to a person who makes a personal connection with poetry, and ending as a poet.

The selections move easily from one poem to the next, especially considering the wide variety of poetry that is included.  The collection flows from theme to theme,  and makes some nice connections along the way.  Putting a poem in which John Keats addresses his fear of death next to the wonderful “Fears of the Eighth Grade” by Toi Derricotte, a modern poem about the fears of a middle school class, shows very starkly how the most universal themes stay the same.  A few very explicit connections like this one will catch the attention of even a less-than-careful reader and will encourage them to make other connections between the poems.

I did find the artwork, which is on every page, a little bit distracting – particularly because much of it looks very pixelated and it covers words in two poems.  I have a feeling that some of this will be fixed in the final book – I will be looking forward to seeing how it all comes together.  A cd of the poets reading their work is included, and it makes a nice supplement to the collection.  Molly Peacock’s audio segment addresses her personal identity and how it relates to her poem – including some word play that relates to ientity within the poem.  It’s a nice way to add content, and will also help some readers who are not familiar to poetry get a feel for the rhythms of the poems they read.

Review copy provided by the publisher.