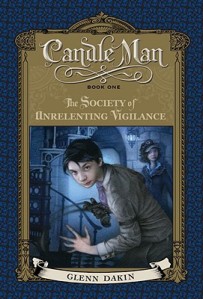 But Theo has a terrible disease, and so he must be kept locked away from other people, he must wear gloves at all times, and he must submit to horrible medical treatments every day inside the Mercy Tube.  And so nothing interesting ever happens to Theo – until he finds a strange package during his birthday trip to the cemetery.  A package with his name on it.  And suddenly Theo finds himself out in the world, and learning some alarming things about his disease and the people who have kept him prisoner for so long.

Theo’s world is a strange and wonderful one, and the reader has the fun of discovering it along with him.  The strange creatures, diabolical machines, and very unusual people who Theo meets would already be enough to leave the sheltered young man breathless and confused, but the people in this world also have a maddening habit of giving things very misleading names.   The Society of Good Works, led by Dr. Saint?  Yeah, they’re the bad guys.  On top of all this, Theo must quickly learn about his strange powers – and what exactly they have to do with the mysterious newspaper clippings about an old hero named the Candle Man.

Theo grows into self-reliance very quickly in the second half of the book – too quickly for me to believe after getting to know him as a completely ineffectual young man who has almost no knowledge of the world.  And honestly, I missed the early version of Theo later in the book.  Watching Theo learn how he world works after his isolation was the part of the book that drew me in most, and also provided some of the funniest moments.  There was some implication that his sudden transformation into the kind of hero who gets things done is tied up into his powers – perhaps this is something the reader will learn more about in later books.

In the end, this is a good old-fashioned adventure story of the kind that has plenty of mystery and doesn’t forget how to be funny.  I did find it a little bit meandering and occasionally too caught up in all the cool creatures that exist in the world.   But since most of the meanders (and the creatures!) are genuinely interesting, I don’t think the target audience will be bothered.  Readers will be curious about Theo’s further adventures – I know that I’ll be looking forward to learning more about the myth of the Candle Man.

Glenn Dakin on the web.